In a tough economy it is hard to buy a brand new car. And if you are interested in performance and speed, a new sports car is definitely out of the question. Thankfully the used car market is full of nice automobiles that can satisfy the need for speed without breaking the bank. Once a new car is driven off the lot it dramatically depreciates. This is good news for you as there are great deals out there on almost new sports cars that have seen little more than weekend use. Below are a few choices for great used sports cars. 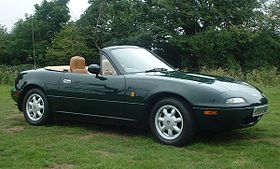 5) Mazda Miata – Every great driver’s car list has the Miata placed somewhere among the ranks. The Miata is a very small 2-seat roadster that uses its lightweight chassis to provide a nimble and thrilling driving experience. The Miata has been around since 1990 which is good news for the used car shopper as there will be a wide variety to choose from. The Miata makes for a great weekend road trip car or a track day racer.

4) Audi TT – The Audi TT is one of those cars that captivated the hearts of many with its interesting and unique design. This sports car combined German engineering and high-end luxury into one fantastic package. The TT has been offered with many different engines over the years including a turbocharged 4-cylinder and a 3.2 liter V-6. While the Audi TT may not be the fastest car on the road, it does offer great handling characteristics thanks to the Quattro AWD system. Opt for the convertible version is you really want to enjoy life!

3) Nissan 350Z – The Nissan Z-Car line dates all the way back to the Datsun Fairlady Z. This car has had a cult following for many years due to sexy look, performance oriented drivetrain, and low price. The Fairlady Z was the vehicle that could give the best from Europe a run for their money. Well fast forward to 2003 and we now have a worth successor in the Nissan 350Z This front-engine, rear wheel drive sports car came packing a potent 3.5 liter V-6 engine that made 300 horsepower. Couple that with a trick 6-speed manual transmission, fat back design, and cool interior; you have the recipe for a great used sports car.

2) Honda S2000 – The Honda S2000 was created by Honda as a sort of 50th birthday present for itself. It had been a long time since Honda produced a performance oriented sports car and the S2000 came about to showcase Honda’s race prowess. The S2000 wasmade 240 at over 9k RPM’s. This little car loves to be revved! The 6-speed manual transmission meant you could race to redline at every shift. The Honda S2000 is a beloved sports car that to this day holds its value well.

1) Chevrolet Corvette –The Corvette has been the epitome of an American sports car for decades. With the new C6 model debuting in 2005 many people where envious of those who could afford to buy one new. Well the good news is that the C6 model is not that different from the C5 model which existed from 1997-2004. The C5 Corvette came with a strong small block V-8 engine that made 345 horsepower and 350 lb-ft. of torque.

Check out a few more affordable cars at the Autobytel website.

View all articles by admin